Home
|
Uncategorized
|
10/24/10 Observations on the lower Rahway River in Carteret and Linden, NJ.
October 28, 2010 by FAV Uncategorized
0
Healthy populations of smaller invertebrates are needed to support larger animals and our native  biodiversity. When visiting the lower Rahway River one will observe many small creatures.  Lets look at some of the hundreds of thousands of invertebrates (e.g. clams, snails and crabs) that inhabit the longest unbridged river mouth ecosystem in N NJ. 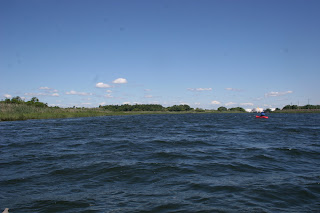 Along the inner bends of rivers there is increased sedimentation and food deposition which forms more extensive mud flats or beaches; these areas support important biological communities that are different than those found on the usually steeper banked, higher energy, outer bends of rivers.  On the major, inner turn of the lower Rahway is one of the widest tidal mud flats where several thousand eastern mudsnails forage.  Snails can be seen on this flat and throughout the lower river. 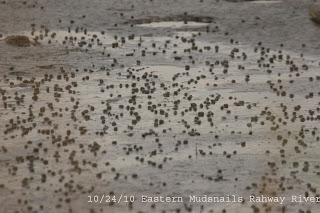 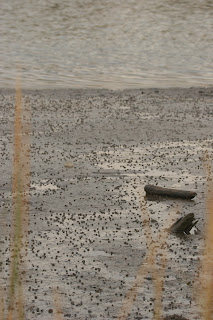 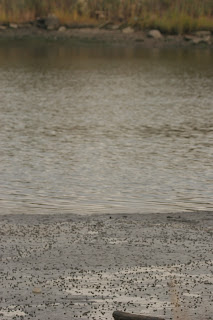 These eastern mudsnails, Ilyanassa obsoleta, tend to prefer areas of higher sedimentation as noted in this paper.

Other species of invertebrates seen on the river include ribbed mussels (Geukensia demissa), the common marsh snail, or eastern melampus (Melampus bidentatus) and at least two species of fiddler crabs (Uca pugnax and Uca minax).  All these animals are eaten by terrapins.   The common marsh snail feeds on Smooth Cordgrass (Spartina alterniflora) so its indirectly  important for terrapins to control the growth of the invasive phragmites reed. 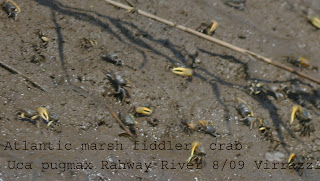 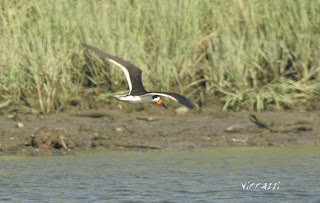 Varied and specific sections of rivers, such as inner bends and marsh free of phragmites, that support high densities of invertebrates are important to the ecology and biodiversity of an area. 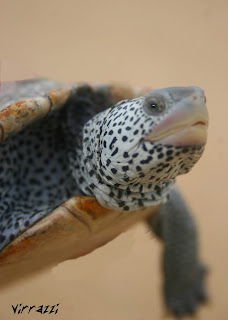 Title mentioned above: ASSESSMENT OF PREY AVAILABILITY FOR DIAMONDBACK TERRAPINS IN A CONNECTICUT SALT MARSH
Thanks Fred Virrazzi
﻿