Home
|
Uncategorized
|
Coast Redwood – The Global King of Biodiversity
February 6, 2011 by FAV Uncategorized
0
The Coast Redwood is the tallest species on earth, forming forest stands of unsurpassed biomass.  Sequoia sempervens (ever living), was probably named in honor of the Cherokee leader Sequoyah of Tennessee.  It reaches 379 feet with a base diameter of 22 feet and can live to 2,000 years. 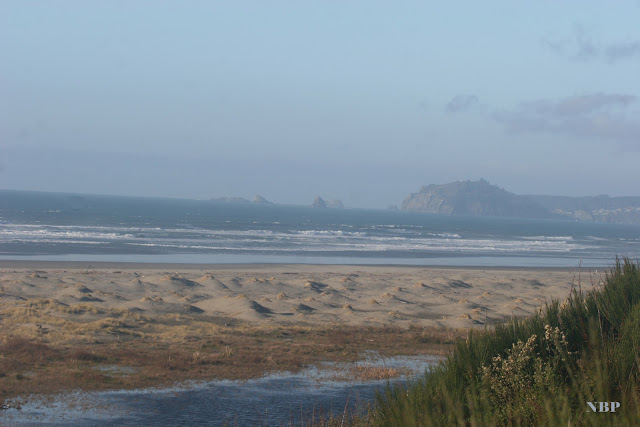 The largest individual tree was discovered only in 2006 during a survey of a remote section of Redwood National Park in NW California.  Below there is a video of the record tree being measured. 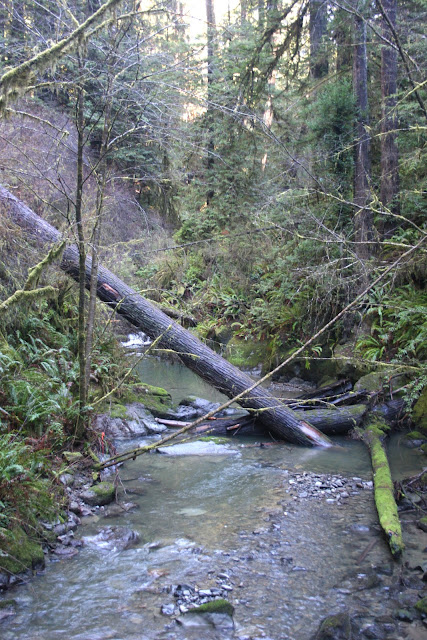 I met with Jeff Marszal, a Resource Management Specialist to plan upcoming NBP projects and we were able to visit this incredible park.  He had told me about the difficult forest survey conditions, with steep slopes, dark conditions, wet understrory and fallen logs 20 feet high and 200 feet long.  It was time consuming, but worth it to hike through this Biosphere Preserve with the sky blocked out by massive tree after tree. 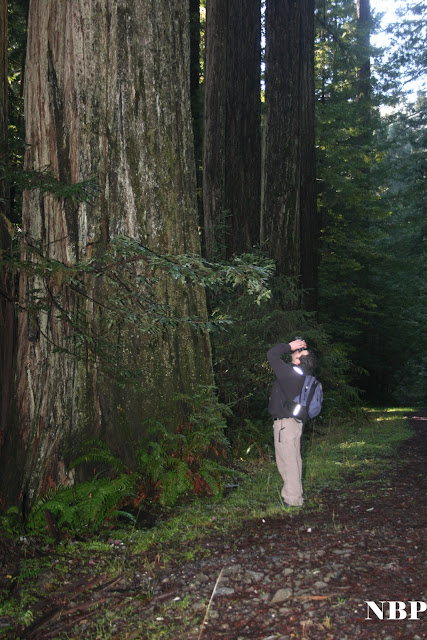 This is an ancient community, dominated by taxa and biodiversity from the Age of Dinosaurs, such as mosses, ferns, conifers, spiders, fish and amphibians.  Warm air from the land passes over the inshore waters forming fog that precipitates out on the vegetation like it once did in most of North America when moist, redwood like forests were dominated by giant reptiles. 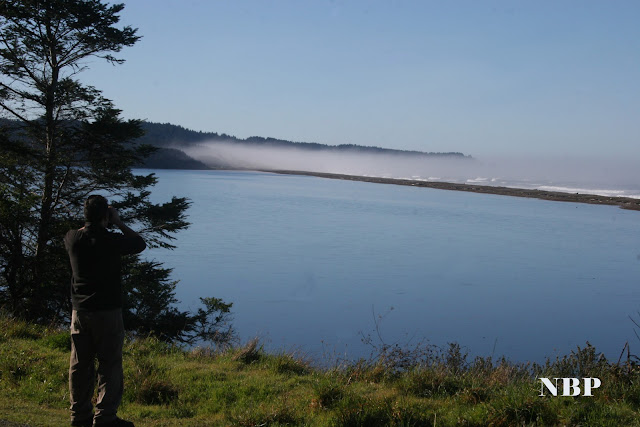 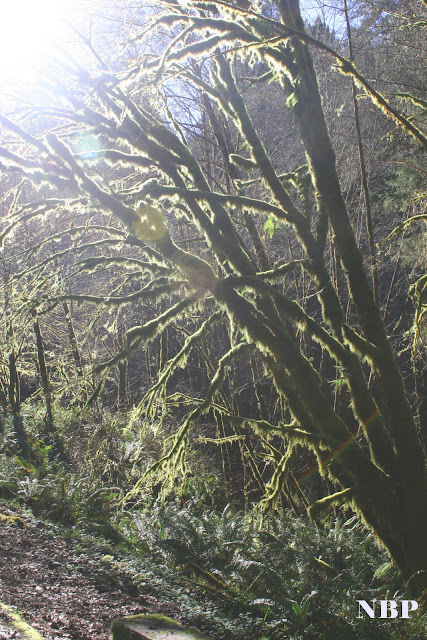 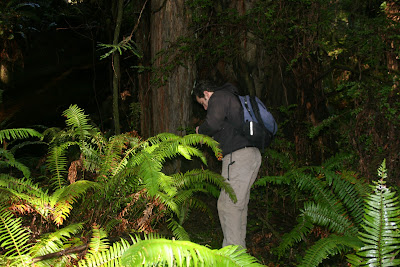 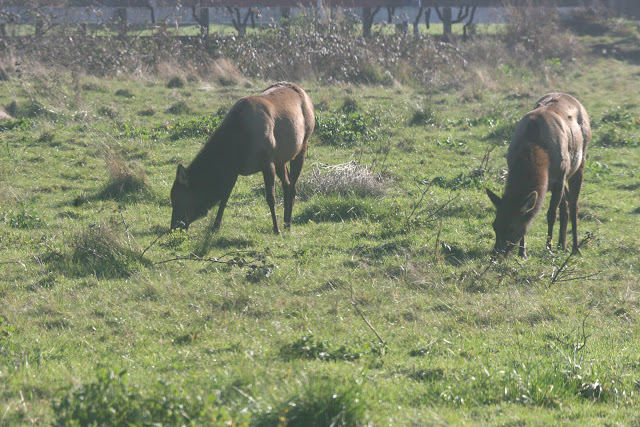 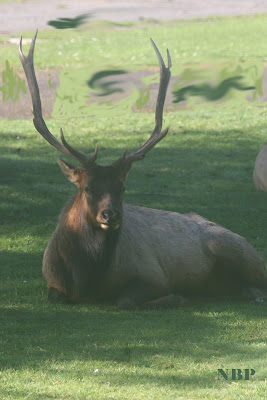 The Roosevelt or Olympic Elk prefers open areas but also seeks out forests.  This is the largest of the four remaining subspecies of elk. 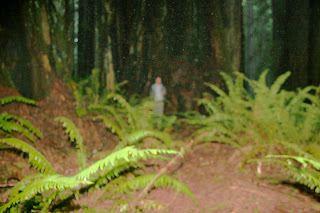 The forest is too dark to get a clear panaromic view even with flash equipment. 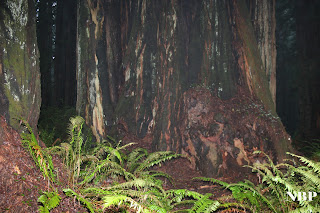 Same tree as above but the flash was moved closer. ﻿ 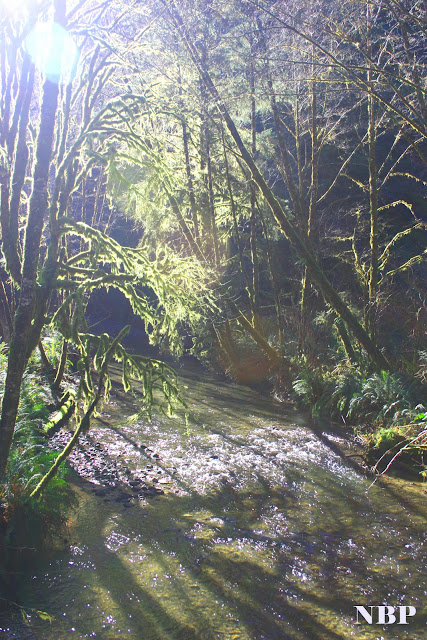 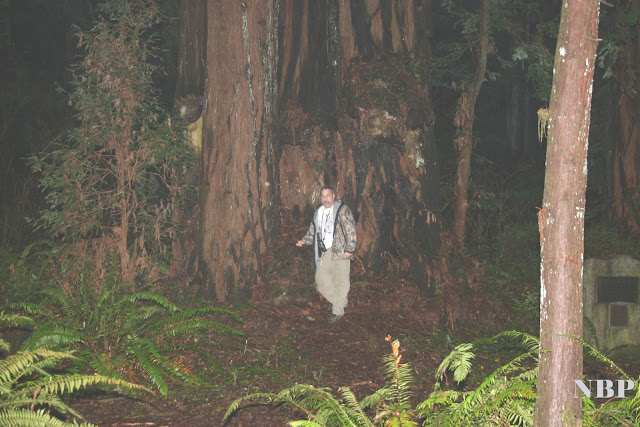 The Coast Redwoods range along a narrow strip of habitat along the NW coast of North America.  They provide a home for many species including the puffin-like Marbled Murrelet whose habit of nesting in trees was suspected but not documented until a tree-climber found a chick in 1974.  It was one of the last North American bird species to have its nest described. The Marbled Murrelet has experienced declines due to logging and any significant climate change could impact many species including the Coast Redwood. 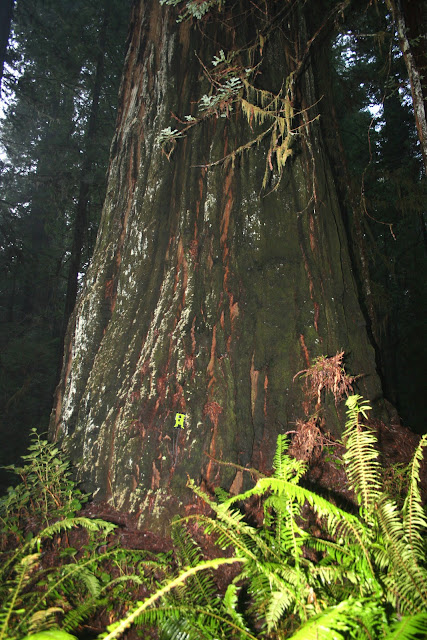 That is a pair of lime green binoculars on the trunk of this Coast Redwood that was over 20 feet in diameter.

Link to videos of the largest tree in the world being measured.