I joined another New Jersey birder from Friday 2/1 to Tuesday 2/5 for a try at several bird species in S FL.  A relatively leisurely expedition that escaped the NJ cold and brought me closer to 800 species in the NA ABA region was expected. He left early on Sunday, Feb 3. The main target species successfully found were, Western Spindalis and La Sagra’s Flycatcher (below)…….however……….

While there a possible Caribbean Martin was reported, causing contemplation of a scramble down three counties and the keys; I was fortunate to get several sky photos of the subject martin, or less likely a different, odd bird. Carribean Martin, if accepted by the Florida OS, would be new species for North America! 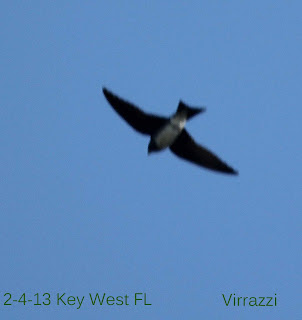 The original plan was to see a few life species in the first days and later inquire about the S FL python situation, an ecological concern, and any recent, possible Ivory-billed Woodpecker sightings in the Big Cypress area. Tanner’s thesis and Bob Russell’s short work both rate this area highly. It has not been covered well by any modern, experienced Ivory-billed searchers as far as I know; although Cornell visited at least the Fakahatchee Strand Preserve with some odd, additional effort in the mangroves. NBP has not be able to find any Ivory-billeds S of the Florida Panhandle however we have spent less time in S FL than other SE US areas. More on all this later. 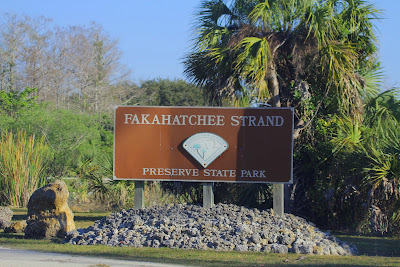 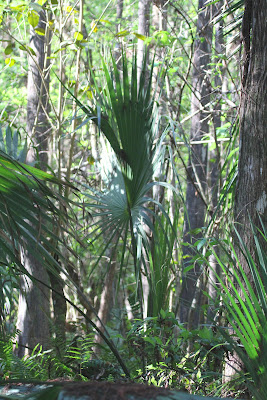 As often occurs on these trips, the unexpected should be expected. On Sunday early PM a text was received about a vague report of a Caribbean or Cuban Martin at Zachary Taylor Park, Key West. I was pursuing the La Sagra’s Flycatcher at Green Cay Wetlands, counties away from the martin; this would be quite a dash with a Super Bowl intertwined. To make the drive more compressed, I lingered at the wetlands until 5 PM as the general photography was good and the La Sagra’s was shy.

Zachary Taylor Park, Key West FL was where the second, first record of Loggerhead Kingbird for North America showed for us in 2007. Say what? It’s the second first, because the first first record was eventually struck down. Loggerhead Kingbird, Tyrannus caudifasciatus, originally was on the Florida and NA lists via a bird  photographed at Islamorada, 12/71–1/72; accepted by Robertson and Woolfenden in Birds of Florida, as were three other photographs from the 1970s. The first bird was judged a Giant Kingbird by James Bond, Birds of the West Indies, (in litt., cited from Stevenson and Anderson 1994).  In 2000 Smith et.al., reviewed the records of the Loggerhead Kingbird from Florida, and he determined that none of the records were detailed enough to determine species. The Florida State Records Committee removed Loggerhead Kingbird from their official list in 2003 as did the AOU Checklist Committee in 2002 and the ABA’s CLC in 2002.

This bird called to be added back to the NA ABA list in 2007:

Well I made it through S Florida and the keys and saw most of the Super Bowl when the lights were on; surprisingly only one other birder trickled in during the time I was there (0800 to 1135 Monday, AM) despite this being a potential mega-tick. My first impression of this bird was—“That’s a Different Hirundinidae Than Usual But its Not a Bull”.

Here are some heavily cropped pictures followed by my description and write up from my field notes taken the day of the sightings (2/4/13). 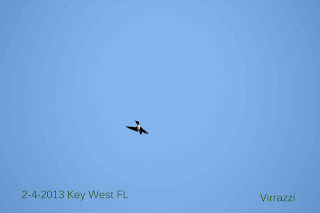 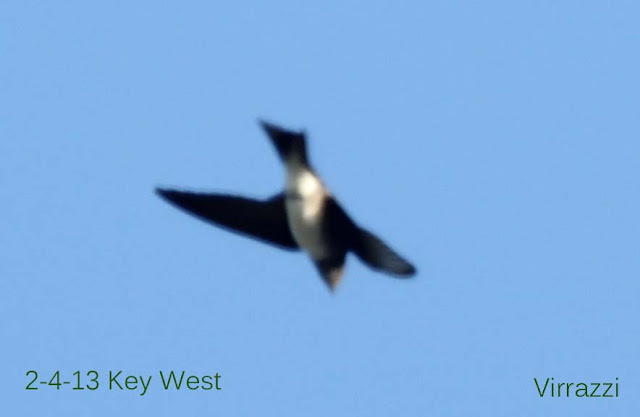 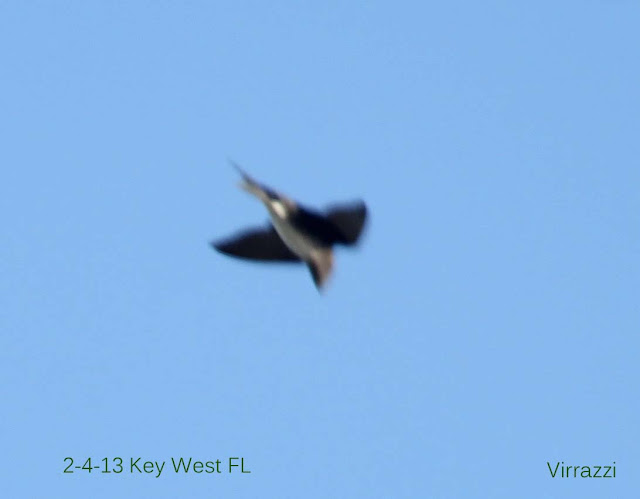 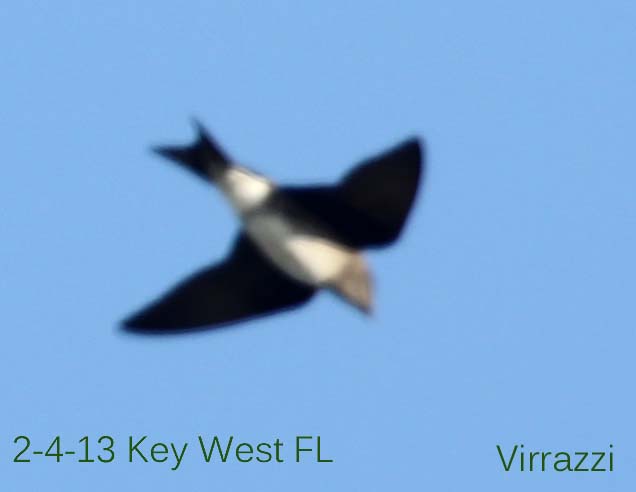 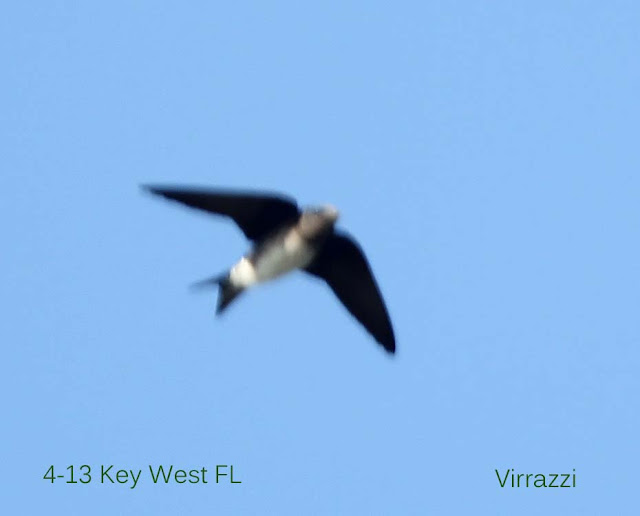 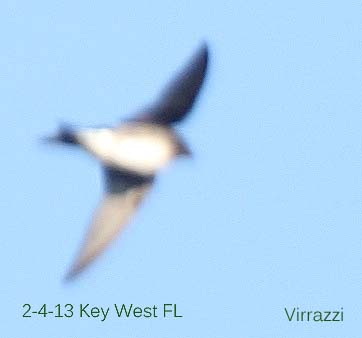 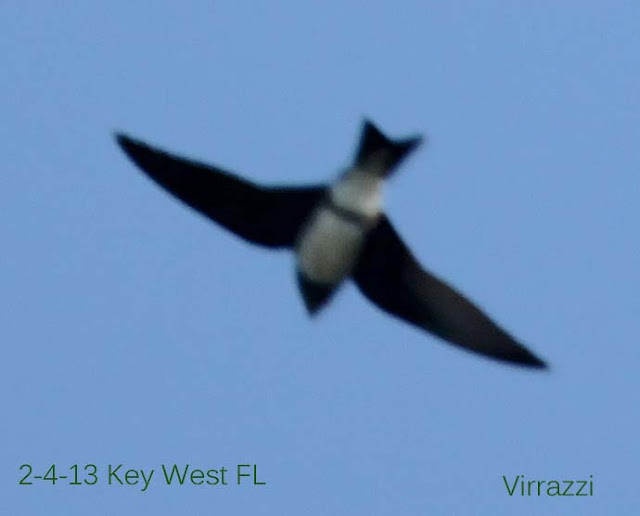 There are several more distant pictures, like these, from various angles, if needed.

Field Notes on the Martin: (transcribed and expanded from handwritten notes of 2/4/13)

Bird shorter than Purple Martins when concurrently together in immediate sky; appeared relatively more compact and wider bodied than PUMAs especially in chest. Glided much more than PUMAs; in general seemed less maneuverable or acrobatic on this day from PUMAs.  Winds were from NNE at 5 to 8 mph.  Bird never appeared to have same giss as PUMA; more swallow-like body, compact, less attenuated in shape than the martin I am most familiar with (Purple); again meaning this bird was not as slender. Bird did not frequently fully extend wings IMHO, making it appear more swallow like than PUMA. Did not hear any calling although it may have been (wind, distractions, distance, short duration of appearances).  Tail was moderately forked when not fanned; when completely fanned the terminal end formed a slightly convex line. The bird was never seen or photographed from less than 40-75 yards away.

While the two adult PUMAs appeared periodically and almost always together approx. 15 times in the 4 hours I was there, the subject bird was infrequently in the same immediate sky and was never flying purposely with these two PUMAs. The bird was a loner; a singleton. It was only in my view from the eastern, elongated,  parking lot ~ 3 times in the 4 hours plus I was there. It showed for ~ 1 minute each time and then wandered off to the NW. It was only later in the AM that I realized the fort top was open for possible closer viewing but I could not locate the bird when up there after 11. The water around the fort may have been the source of flying insects that periodically attracted it.

Note that in direct, bright AM sunlight the bird appeared at times buffy brown and warmer in throat and head than is shown in some pictures. Another possibility is that there was a female martin that appeared ( a second bird).  If only one bird, this buffiness may have been more a function of light reflection or base feather color than actual distal feather color. The head feather color appearance was perhaps a result of some feathers being dark brown or blue black and some feathers being all or partly lighter brown. The remiges and tail were in general darker than the rest of the body. I had no books of any type although a later arriving birder (Nancy Glickman) had an Eastern US guide which I used to confirm the elimination of Rough-winged Swallow via moderately forked tail and darker dorsal body/wing/tail and ventral wing/upper chest color; although the head/throat color periodically suggested a warm Rough-winged when direct sunlight was perpendicularly on the bird.  The bird appeared to not be an adult male or adult female ASSUMING AT THE TIME that these age classes had to have a very dark blue or blue-black head in winter.

I never saw any of the pictures of the bird from 2/3 taken by others and was not aware of the exact plumage variations, any sexual dimorphism or exact characteristics of this species while in the field.  Zeiss 10X bins were used; light conditions were sunny/bright. 60 to 70 degrees, winds from NNE.  Most pictures taken at 20 to 45 degrees up, to the W, NW or SW.  I have ~ 25 pictures.

More to come in final transfer of notes/words. I also must check again to see if I filmed this bird; battery power was low and bird disappeared quickly.
__—— ———-____—

(Upon home review of 2/3 pictures taken by others I believe the bird above (2/4) is very likely the same bird seen on 2/3.  If so some of the 2/3 pictures seem to darken some of the ventral and the head of the bird due to body shadowing or back lit conditions compared to my pictures.  I assume some of the the 2/3 pics were taken in less direct light on viewable surface than 2/4 and/or the 2/3 bird was back lit a bit.  The relative direction of the sun to the bird may be enough to explain the differences.  The 2/3 bird may have been photographed to the east of camera if in the AM while my bird was taken to the west on 2/4 AM.

Perhaps specific knowledge of the Caribbean martin species’, molt, aging and sexual dimorphism will clinch this ID.  If not a literature review and/or a museum visit may better explain these pictures as far as species, sex and age. 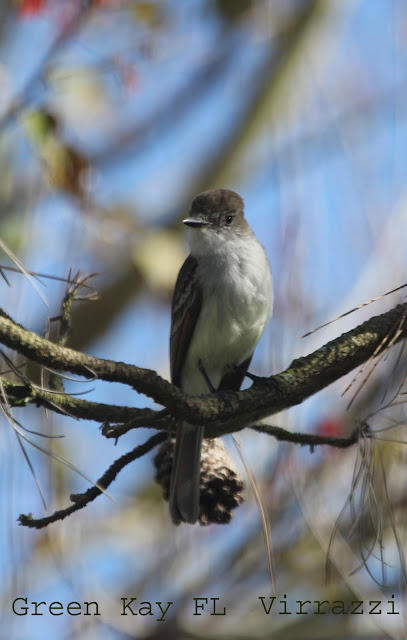 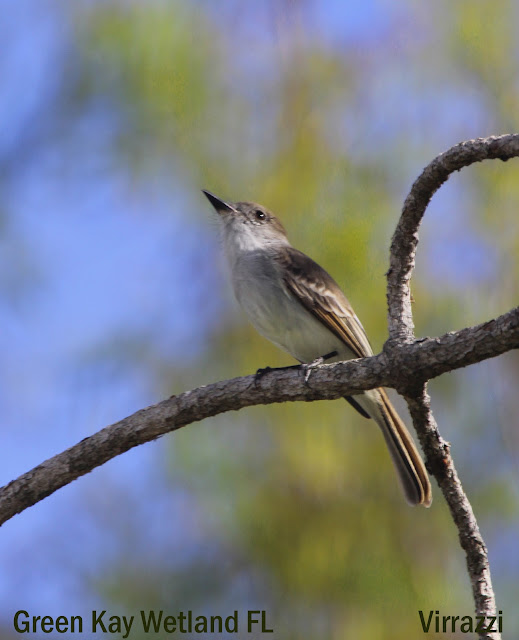 Western Spindalis female, on Virginia Key in the AM is best, found by call note 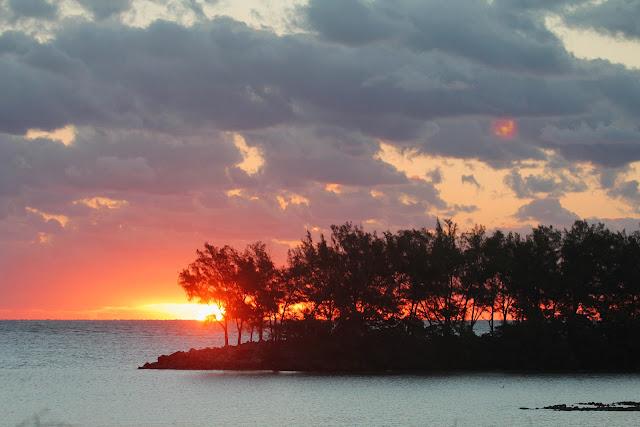 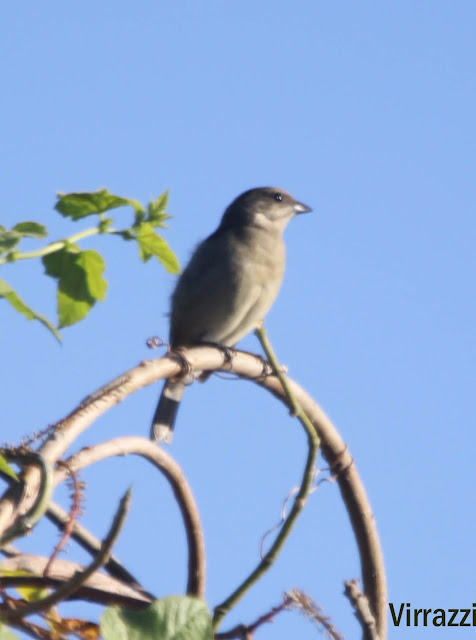 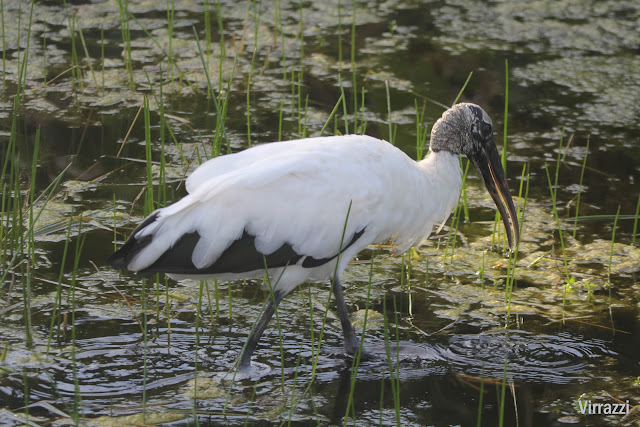 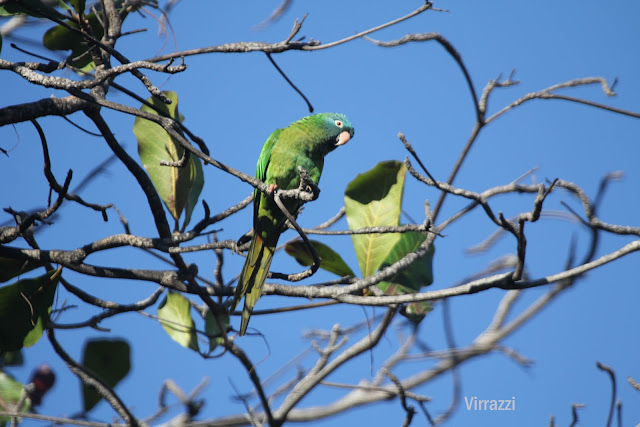 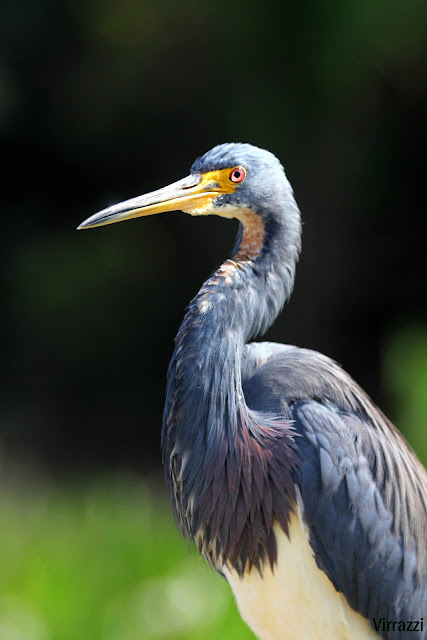 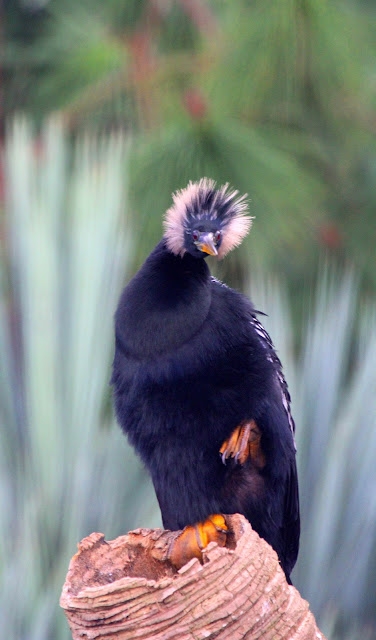 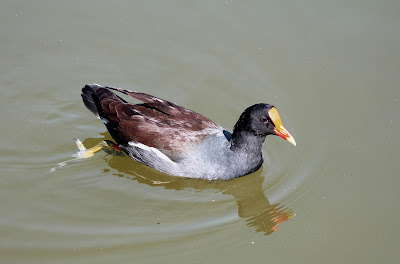 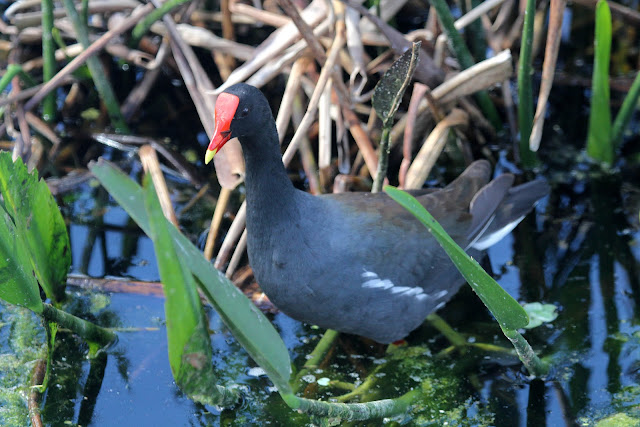 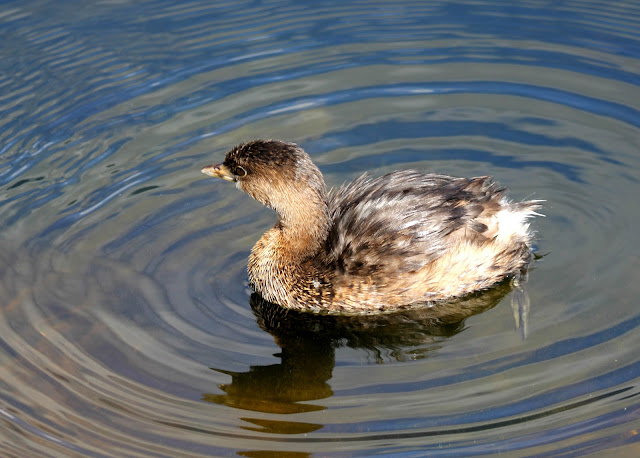 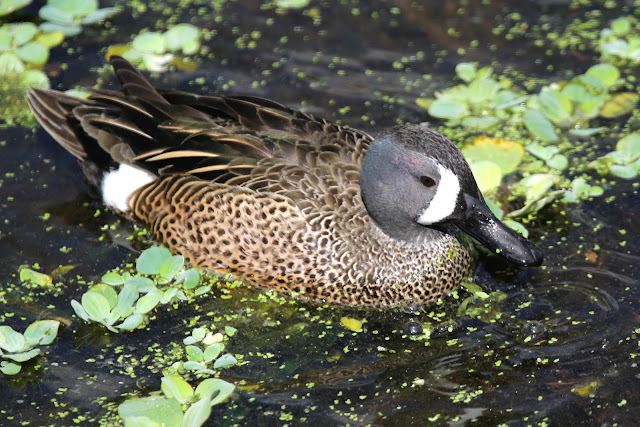 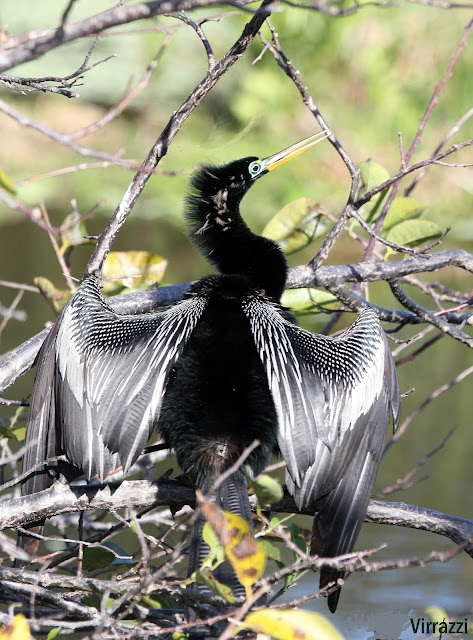 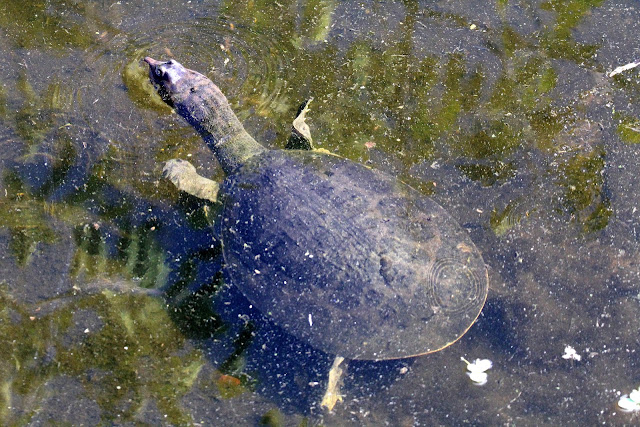 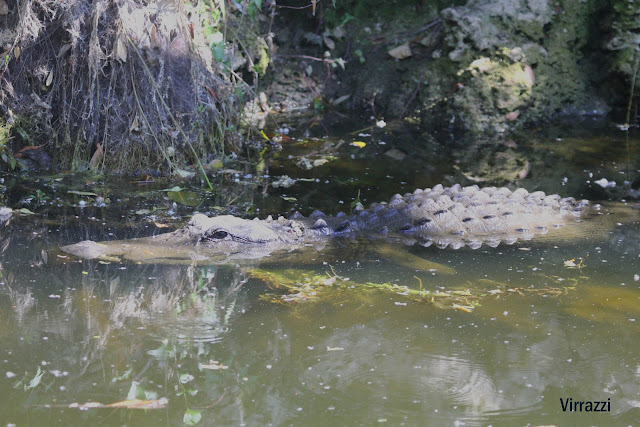 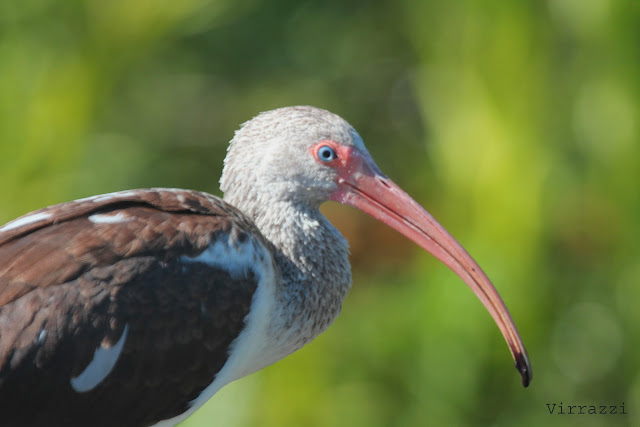