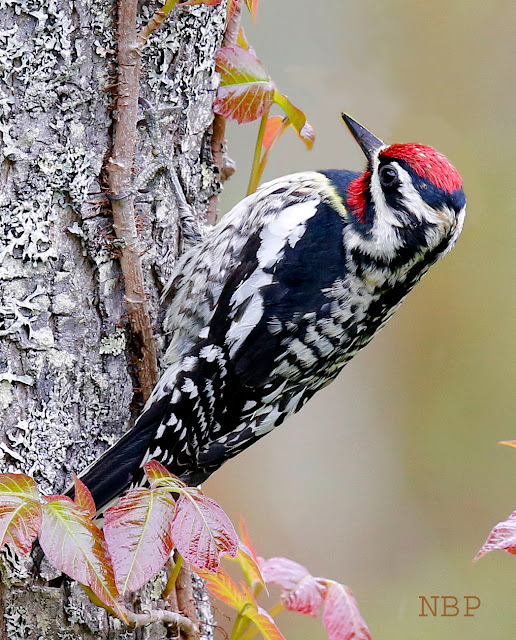 Had a breeding pair of Yellow-bellied Sapsuckers feeding two or more nestlings in the Pequannock Watershed, Passaic County on 6/29/14.

While bushwacking deep in some good forest, a distant, nasal note of a suspected sapsucker was followed. Bird by bird, over an hour the call grew into a family group. No other individual sapsuckers or pairs were in the immediate area or seen during that 3 mile hike but habitat is expansive and the afternoon heat crept in. 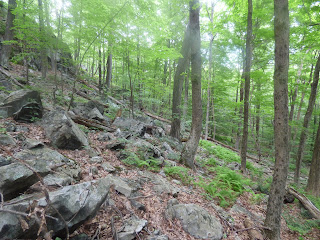 During this spring (2014) and last spring and summer (2013) I hiked almost every trail from and near P1-6 (designated parking areas of the watershed), some of the excursions were day long loops that included multiple trails. Almost all birds heard or seen were identified. The species is not an uncommon or very uncommon breeder; it is very rare breeder or absent as a breeder in the watershed.. 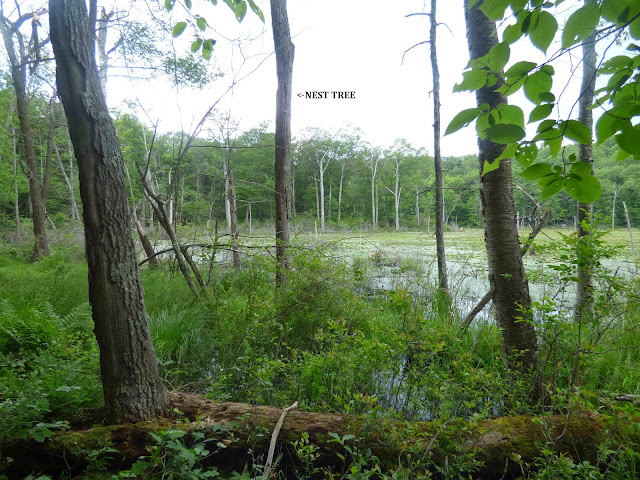 I suspected this species would soon be found definitively breeding in Passaic County based on the rapid and recent spread through Sussex County, NJ (just to the west of Passaic County). 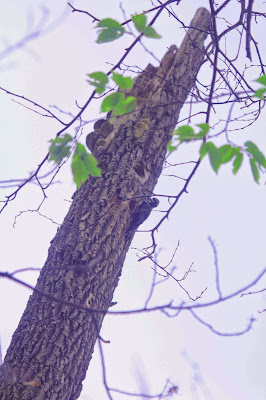 This is another species that some authors miss when discussing the true, colonial and precolonial avidiversity of NJ; it likely bred 150-300 years ago in at least all 4 of the most northerly NJ counties, plus Morris, Essex, Union County and Somerset Counties which the two Watchung Mountains ridges run through.

The decline of the species probably began with the local reduction or extirpation of the beaver in NJ; their work supplied new dead wood into the ecosystem and sapsuckers prefer stressed and dying trees for nests. The subject sapsucker nest portrayed this predilection as it was associated with a tree killed by beaver flooding. The complete disappearance of the woodpecker, likely caused by logging, grazing and farming, seems to have occurred prior to 1900 in some of the mentioned NJ counties including Passaic County. 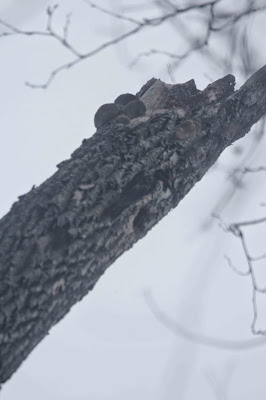 Evidence today that the Pequannock Watershed was logged and saw various farm or livestock use lies with the various straight stone berms that mark property lines built after acreage was cleared for use. Trees over 120 years are rare in the watershed. The absence of the species in NJ was chronicled in The Wilson Bulletin, Kohler 1913, where he stated then that it was not breeding in that century (meaning at least 1900 to 1913). The NJ breeding bird atlas of the 1990s, Birds of NJ (Walsh, Elia, et al.), lists several safe date 1995, Passaic County sight records; breeding was probable but unconfirmed. 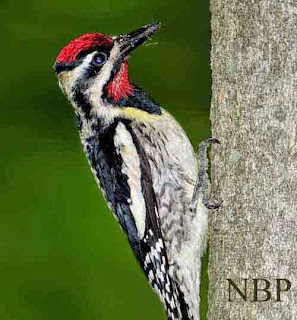 Near the subject sapsuckers there was a fully fledged family of Hairy Woodpeckers showing nominal breeding phenology. I am wondering if the late date and location of this nest weakly infers a second nesting attempt after a run in with a Black Rat Snake or other predator. However sapsuckers do seem to nest a bit later than other NJ Picidae. 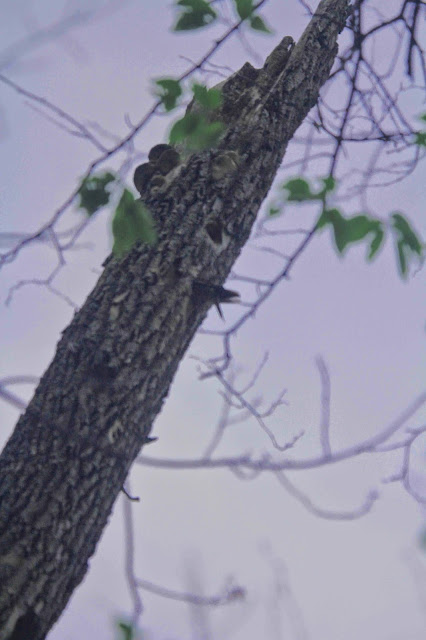 The nest tree, a secluded dead sweet gum, 18 inch DBH and 70 feet tall was surrounded by some standing water. It was located at the SE shore of a large beaver dammed lake. Some Picidae nest in isolated trees located in standing water to deter terrestrial predators and prevent arboreal snakes (most in the Elaphe genus).from climbing onto the nest tree The literature may note that sapsuckers sometimes nest in standing water perhaps to avoid some predator pressure. However other nests (4) I have found in Sussex County, NJ were in upland habitat.

The hatchlings could be heard from over 100 feet away……and the adults were a bit jittery. 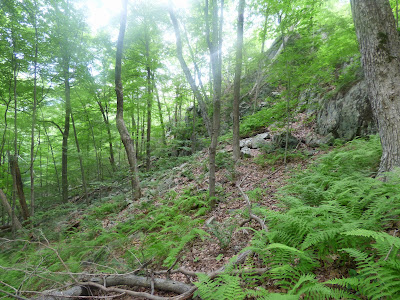 Since the literature is minimal in NJ for this species I have looked up some other states literature.

There are 11 records of nests with eggs in Vermont, with dates ranging from May 12 to June 20. Nestling dates range from June 4 to July 17 (41 records), and fledgling dates range from June 24 to July 13 (9 records). Of 27 Yellow-bellied Sapsucker nest cavities in Vermont, 18 were in aspens, 4 in American beeches, 3 in red maples, 1 in an unidentified maple, and 1 in a hemlock. Kilham (I971a) reported that Yellow-bellied Sapsuckers in New Hampshire will nest in aspens, beeches, and butternuts infected with the tinder fungus (Fames igniarius). This fungus affects only the heartwood, leaving sapwood intact. Lawrence (1967) observed that Yellow-bellied Sapsuckers prefer to nest in live trees. Nest predators include raccoons and red squirrels.

Eggs: [Author’s NOTE: The yellow-bellied sapsucker lays four to seven eggs to a set, though five or six eggs are more commonly found. They vary from ovate to elliptical-ovate and sometimes to elliptical-oval. The shell is smooth and either dull or moderately glossy. They are pure white, like all woodpeckers’ eggs. The measurements of 52 eggs average 22.44 by 16.92 millimeters; the eggs showing the four extremes measure 24.9 by 17.0, 23.8 by 18.0, 20.57 by 16.26, and 22.1 by 15.5 millimeters.]

Young: As in the case of most nestling birds reared in a hole in a tree, little is known of the young sapsuckers while they are in the nest.

Frank Bolles (1892) speaks of “a nest filled with noisy fledglings whose squealing sounded afar in the otherwise silent woods. * * * The parent birds came frequently to the tree, and their arrival was always greeted by more vigorous crying from the young.”

William Brewster (1876a), in his study of the bird at Umbagog Lake, Maine, says: “The young leave the nest in July, and for a long time the brood remains together, being still fed by the parents. They are very playful, sporting about the tree-trunks and chasing one another continually.”

Frank Bolles (1892) has given a very interesting, detailed account of rearing three nestlings, about to be fledged, over a period of three and a half months. The three birds were dissimilar enough in coloring to be distinguished from one another; they proved to be two males and one female; and they soon developed marked differences in conduct and personality. Mr. Bolles at first kept them in a large cage in which they had ample space to climb about and later allowed them to fly around a room. They became very tame, letting him handle them freely. They subsisted almost entirely on maple syrup and water in equal parts, fed by hand at first, but in a few days they drank readily from a basin. They caught a few flies and ate some other insects that entered the cage, attracted by the syrup. Mr. Bolles says, however, that “the number of insects caught by them in this way was small, and I do not think amounted at any time to ten percent of their food.”

The birds were lively and apparently in perfect health from the time they were captured, July 7, until October 11, when one of them, the female, began to droop. Two days later she had a convulsion in the morning and died in the afternoon. Autopsy showed that her body was well nourished and that the organs were apparently normal except the liver, which was “very large, deeply bile-stained, and very soft.”

A week later the other two birds died after exhibiting the same symptoms as the first bird. The Department of Agriculture examined the body of one of these birds and reported enlargement and fatty degeneration of the liver.

Mr. Bolles remarks that “the most probable cause of this enlargement of the liver, which seems to have been the reason for the death of the three sapsuckers, was an undue proportion of sugar in their diet. In a wild state they would have eaten insects every day and kept their stomachs well filled with the chitinous parts of acid insects. Under restraint they secured fewer and fewer insects, until during the last few weeks of their lives, they had practically no solid food of any kind.”

Summarizing his observations, he says:

From these experiments I draw the following conclusions: (1), that the yellow-bellied woodpecker may be successfully kept in captivity for a period corresponding to that during which as a resident bird he taps trees for their sap, sustained during this time upon a diet of which from 90 to 100 per cent is diluted maple syrup; (2), that this fact affords evidence of an extremely strong character, in confirmation and support of the theory that when the yellow-bellied woodpecker taps trees for their sap he uses the sap as his principal article of food, and not primarily as a bait to attract Insects.

Winton Weydemeyer (1926) in Montana “observed a pair of red-naped sapsuckers * * * gathering sap to feed their young in the nest. A regular tree-route, followed alternately by the male and female, included a quaking aspen, a larger alder, and a large willow, in which borings had been made. The birds flew directly from the nest to the aspen, and gathered the sap that bad accumulated since the last visit; then flew to the alder and to the willow, repeating the process; and finally flew back to the nest, without hunting for insects. Occasionally the male would vary the process by catching a few flies from the air, eating some and carrying some to the nest.”

Forbush (1927) gives the incubation period of the yellow-bellied sapsucker as “probably about 14 days.”

A. Dawes DuBois furnishes the following note: “Yellow-bellied sapsuckers were observed feeding young in a nest, in Hennepin County, Minn., on July 5, 1937. The nest was about 25 feet above ground in a partially dead tree at edge of willow-and-alder thicket adjoining woods. Both parents were bringing food. The squeaky note of the young was repeated with such regularity (about four times a second) as to indicate that only one nestling was uttering it. When the nestling was being fed at the entrance, by the poking method, these notes went up to a higher pitch, and were sometimes choked off almost to inaudibility.

“Two days later, the parents were still feeding very frequently. The male, who on the first day had been seen to bring a bright red berry about the size of a pea, again brought a bit of small red fruit. On one occasion, when the parents were away, the nestling put its head out of the hole; but it did not do so when being fed. In general, alarm calls of the parents had little if any effect upon the squeaking of the nestling, though at one time, July 7, the squeaking seemed to cease for a short interval when the parent gave the alarm notes. For the most part the series of squeaky notes is continuous. It was by hearing these sounds that this nest was discovered.”

This is another species that some authors miss when discussing the true, colonial and precolonial avidiversity of NJ; it likely bred 150-300 years ago in all 4 of the most northerly NJ counties, plus Morris, Essex, Union County and Somerset Counties which ellied Sapsucker
Their ability to draw phloem sap from trees makes the Yellow-Bellied Sapsucker an important ally for several other animals that drink tree sap. Among mammals, bats, porcupines and squirrels all appreciate the efforts made by the sapsucker.
Their greatest beneficiaries, however, are hummingbirds. In particular, the ruby-throated hummingbird would be hard pressed to find enough nectar from flowers in the northern edges of its breeding zone. The tree sap released by sapsuckers makes a perfect substitute for nectar. 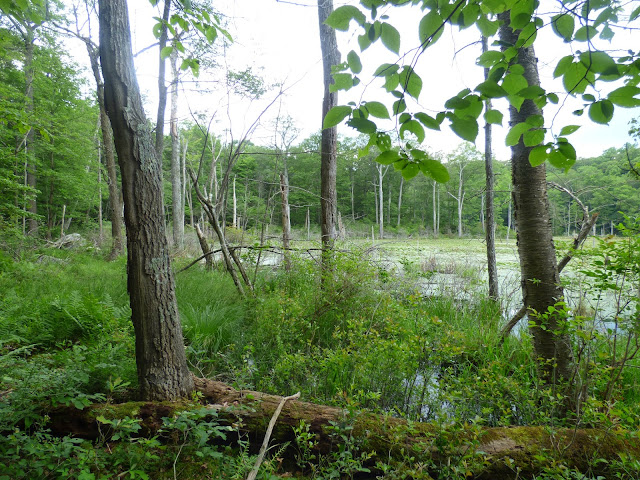